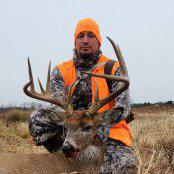 By Gencountyzeek,
October 18, 2021 in Out of New York Hunting

Sooooo pumped to write this. Planning a 2022 diy Idaho elk/muley hunt. I have a buddy that is out there currently and took a nice mule deer and did some scouting for next year. We will be in the stanl

Wanted to do a hike that was not roads around my house so stayed close by and went to Darien state land. Pack was 63lbs, got to try out the platypus water filter system in the creek, happy with how ea