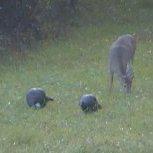 Congratulations to Josepmrtn in the youth and Adkbuck and Lawdwaz in the senior. Wow, one point difference. Nice job people! Enjoy. I would like to personally thank WNYBuckHunter for his donations,

Got a good idea who may win that category!!! I am also in for a prize donation. A Bass Pro Shops Gift Card.

Maybe a prize for the smallest button buck