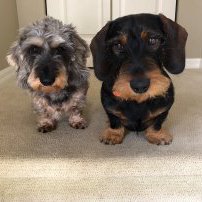 By outdoorstom,
September 15, 2018 in General Hunting

Luna was pulled off injured reserve for a 300 yard track this morning of my deer:-) He ran by my camera after the shot.

10/9/2018   Well, Kunox redeemed himself tonight after yesterday’s squirrel fiasco. I was called at 6:00 tonight by a bowhunter that had gutshot a doe. He had tracked it and pushed it out of